Medical marijuana is pretty much the same product that is used for recreational use. The only difference is that in this context, it is taken for medicinal purposes.

Marijuana has over 100 types of chemicals called cannabinoids. Of these, it’s Delta-9-tetrahydrocannabinol (THC) and Cannabidiol that have medicinal effects.

Although the FDA only approves marijuana for the treatment of Dravet and Lennox-Gastaut syndromes, there are a handful of other conditions that it can be used to treat including Alzheimer’s, cancer, appetite loss, eating disorders, pain, wasting syndrome, and mental health.

Unfortunately, despite its great medicinal benefits, cannabis also has a number of side effects that you should understand. Here is a low down of the worst.

This refers to a mental disorder that impairs thought and emotions to an extent that a person loses contact with the external reality.

This disorder generally makes it impossible for someone to distinguish what is real from what is not. It can manifest itself in the form of visual distortion (commonly mistaken for hallucinations), pervasive delusional thinking, and hearing voices. 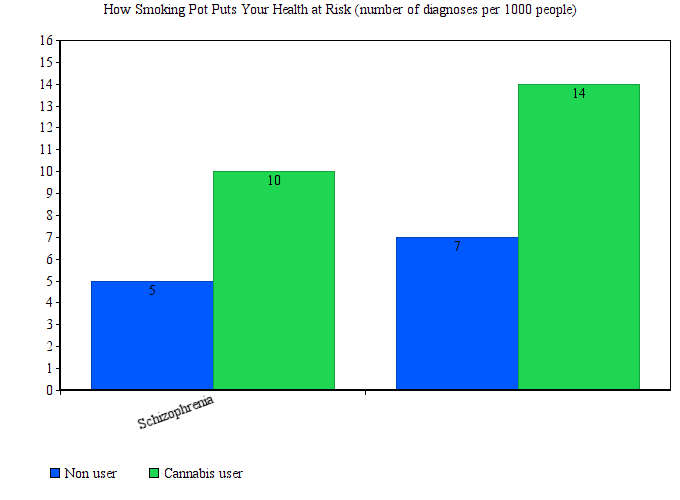 Worth mentioning is that in its pure form, cannabis does not cause hallucinations. Hallucinations are caused by drugs known as hallucinogens.

These include drugs such as Magic Mushroom and LSD that contain substances called serotonergics. Serotonergics interfere with the serotonin system thereby altering or blocking the transmission of messages in the brain.

Cannabis, on the other hand, does not contain serotonergic substances. It has cannabinoids such as THC that binds to cannabinoid receptors.

THC has also been found to affect the optic nerve directly- mostly in acute usage- and this is what causes a wide array of effects including blurred visions and flashes that are mostly mistaken for hallucinations.

Psychosis due to the use of marijuana has been found to be prevalent among folks from a family that has a history of this disorder. However, this study found out that this mental disorder can also affect people who have used cannabis for a lengthy time (above 5 years) and in high potency.

This one mainly applies to folks who opt to smoke medical marijuana. Generally, smoke - regardless of its source - is harmful to the lungs.

Speaking to the Canadian Medical Association Journal, Don Sin, a researcher explains that weed has 4000-5000 types of chemicals in it.

Most of these are the same toxins, carcinogens, and irritants that you’ll find in tobacco smoke. The thing with weed is that it’s smoked slightly differently from tobacco in that the smoker needs to breathe it in deeply and hold it a little longer to allow better absorption. 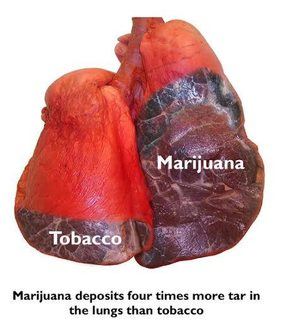 When inhaled, research shows that the weed smoke injures the cell lining of your airways. These cell linings form your lungs’ immediate line of defense that fights germs and infections and also removes dust.

This is what causes chronic bronchitis that is associated with symptoms such as phlegm production, chronic cough, acute bronchitis, and wheeze.

In most heavy smokers, cannabis has also been found to cause air pockets in between the lungs as well as on the external walls of the lungs.

In addition to the above effects, smoking weed can also increase the risk of other respiratory tract infections.

Smokers who have a weakened immune system are at a higher risk of Aspergillus. This is a mold that grows on marijuana and can cause lung disorders.

Well, while there’s very little research on vaporizers, a 2007 study published in Harm Reduction Journal found out that marijuana users who used vaporizers had fewer breathing problems. However, keep in mind that vaporizing weed releases ammonia and this could lead to irritation and asthma among other lung health issues.

The effect of cannabis on high and low blood pressure is just as complex as the evidence around it. When you consume marijuana, especially for the first time, you’ll experience a spike in your blood pressure as well as an increased heart rate.

This initial spike usually lasts for around an hour. During this hour, there is an increased risk of events such as heart attack and stroke.

Smoking cannabis has been found to increase the risk of heart attacks by 4.8 times during the first hour. Now, although the risk is generally low when using medicinal cannabis, experts advise people who already have arthritis (Buerger's disease which is commonly associated with cigarette smoking) to monitor their blood pressure closely.

In most cases, the heart rate should regain normalcy a few minutes after the stimulus. If you have known or unknown heart conditions, however, the heart rate, as well as blood pressure, may take some time to come down. And this means that your risk of cardiac arrest is prolonged.

Worth noting, the reason why there aren’t so many cases of cardiac events that can be directly linked to marijuana use is that tolerance sets in with frequent usage.

Sure, after subsequent uses, and as your system gets accustomed to medical marijuana, you might start experiencing a net decrease in your blood pressure. This will be experienced in the form of dizziness if you remain standing for a few minutes after consuming marijuana.

If you have concerns regarding your blood pressure after using medicinal marijuana, it’s important to monitor it closely or even consult your doctor.

As a medical marijuana user, you might have to deal with frequent episodes of sleepiness after each use. The way weed causes this sleepy feeling boils down to how it works in your brain and its components.

When we talk about the components of marijuana in relation to drowsiness, terpenes are among the most commonly highlighted.

Terpenes refer to molecules that give the cannabis flower its distinctive smell. Some of these molecules especially myrcene have been known to elevate the sedative property of weed, especially when combined with tetrahydrocannabinol (THC). This is according to a review recorded in the British Journal of Pharmacology.

Other types of terpenes commonly found in cannabis strains include linalool and nerolidol. When all these sedative components are combined with THC and CBN they are bound to make one powerful insomnia tool.

Mind you, THC on its own has also been to impact sleep. In this 2008 study, the researchers found out that treatment using oral THC led to a prolonged sleep in phase 4. This phase is also known as the restorative phase and it’s when the human growth hormone is released to repair muscles and damage from the previous day.

As it turns out, this side effect could be a bother for some users and a benefit for others. If you are not using medical marijuana as a sleep aid, it could affect your short-term performance on some day-to-day tasks.

But you don’t have to discontinue it. Simply, consider picking Sativa strain as it has lower sedative effects compared to indica.

There is a lot of conflicting information on the link between marijuana and depression. If you’ve done thorough research on this issue, you might have come across several sources that suggest cannabis helps in reducing depressive symptoms thanks to its ability to alter the balance of the mind.

However, a lot of other studies suggest that weed does more harm than good as far as depression is concerned. 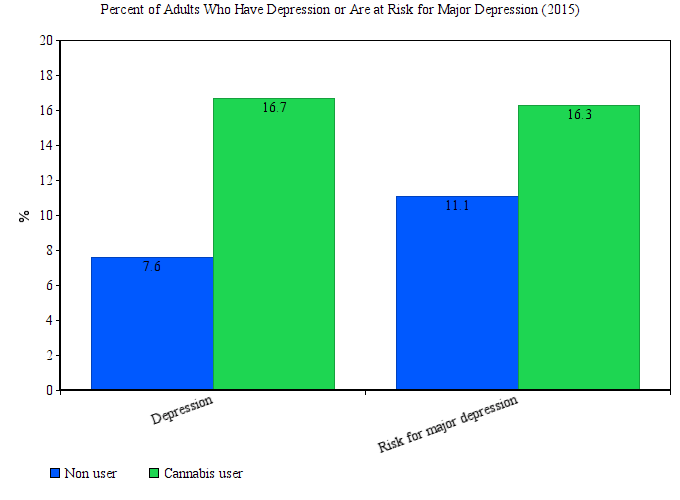 For instance, although researchers are still to come up with a conclusive biological explanation on how cannabis can cause depression, this study on National Institutes of Health suggests that heavy cannabis use can increase depressive symptoms.

The researchers in this study also state that there is evidence, albeit little, of the association between early use of cannabis, regular use, and later depression.

This suggestion is parallel to a finding by another study conducted by researchers from the University of Oxford, UK, Rutgers University, USA, and McGill University, Canada.

The results of this study - and which were widely reported across UK media platforms- showed that young adults who used cannabis had a 37% higher risk of depression than non-users.

In addition, suicidal thoughts among weed users were 50% higher and suicide attempts were 4 times higher too.

Red-rimmed eyes are a typically classic giveaway that you’ve just toked. While most recreational marijuana users don’t mind a thing about it, it might not be welcome for real medical weed users. But the good part is that not everyone is prone to red eyes after hitting ganja, and the redness can be solved too.

The main reason why weed makes your eyes red is that it lowers your blood pressure. Consequently, it causes the blood vessels and capillaries to dilate and stand out. As a result, the eyes receive a massive flow of blood and a notable boost of oxygen and nutrients which causes the big red veins all around the iris.

By the way, bloodshot eyes are not limited to those who smoke their marijuana. You’ll still have the effects even if you consume it through edibles. This is because it’s the cannabinoids that cause it, not the smoke.

As mentioned before, some people will get red eyes after consuming marijuana while others are affected slightly or the effects appear and vanish within minutes.

A good explanation for this is that marijuana affects people differently depending on their rate of metabolism.

Basically, people who metabolize weed fast have a quicker onset of red-rimmed eyes. But the effect also tends to dissipate fast.

On the other hand, if you have a slow metabolism, the redness may take some time to appear, but it might last longer too.

In addition, the high intensity of redness also suggests that you are smoking high-quality and fresh marijuana with a high THC concentration.

There are a few options of getting rid of bloodshot eyes including using eye drops that are meant for this purpose. Drinking a lot of water as well as going for strains that have low or no THC at all will also help a lot.

A common complaint among medical and recreational marijuana users, cottonmouth refers to a persistently thirsty and sticky mouth that doesn’t go away. This is yet another telltale of a marijuana user and it gets worse especially if you are not well hydrated.

This drying effect is a naturally occurring condition that is caused by the action of the cannabinoids in marijuana on the Endocannabinoid system (ECS).

The ECS has cannabinoid receptors in the brain and submandibular glands located at the bottom of the mouth and which are responsible for producing up to 75% of the saliva in the mouth.

After consuming weed, THC binds to the cannabinoid receptors in the brain and the salivary glands thereby interfering with the reception of messages. As a result, the user experiences a reduction in the production of saliva.

All these make a list of the most important skills when driving. It goes without saying that whenever they are impaired even slightly, the chances of being involved in a motor vehicle crash are significantly increased.

Not to be taken lightly, NBC News has it that auto crashes have increased by 5.2-6% in states that have legalized recreational use of marijuana.

To affirm these findings, another report by the Governor’s Highway Safety Association shows that 38% of the drivers in all the fatal accidents in 2016 were positive for marijuana only. 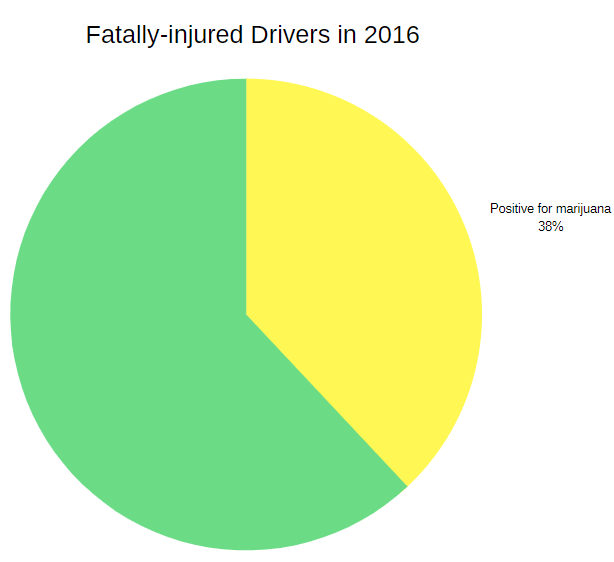 To answer the obvious question in your mind, you’ll get arrested if the cops confirm that you are driving under the influence of marijuana even if you are a medical user.

Notably, most states’ laws are slightly more lenient with impaired driving that is as a result of medical marijuana. Thus, you might want to understand your state’s laws on this issue first.

All in all, impaired driving is dangerous driving and a public safety concern for everyone else using the road. It should, therefore, be avoided at all cost. Read more on how marijuana impacts driving skills and its dangers and consequences here.