The recent trend of using bleach to pass drug test only proves how desperate times call for desperate actions in the world of stoners.

Don’t even think of drinking bleach. Even in its diluted form, it can easily damage your health or even cause death.

Clorox (a brand of bleach) is the most commonly used for this purpose.

While it’s true that bleach can break down the THC metabolites in urine when used as an adulterant, it’s straightforward for the lab technicians to detect it in urine even with their naked eyes.

In this article, we’ll be looking at how people use bleach to try to beat a drug test, its effect on urine, and what it does to your health when ingested.

If you are looking for a method that works, read this article: How To Pass a Urine Drug Test in 24 Hours.

You’ll be wrong to think that the idea of ingesting bleach to force a false negative in a drug screening test started yesterday. Fox10tv has reported these cases since 2007.

In one of these scenarios, a juvenile defendant passed out shortly after a court hearing in Baldwin County, Alabama, in 2007.

Later, he revealed to the paramedics that he had ingested bleach a few days earlier in a bid to beat an upcoming urinary analysis.

This is just one among hundreds of other cases where stoners have resorted to these extreme measures hoping that bleach will help in ‘cleansing’ their systems just as it does in removing stains.

Speaking to mybinc.com, Mahoney, a Probation officer, says that when ingested, the components of bleach can destroy your insides.

Major Anthony Lowery of the Baldwin County Sheriff Department says that this scheme doesn’t work in passing a drug test.

On the contrary, it can wreak havoc on your digestive tract by eating away your throat, stomach walls, and other soft organs.

Asked whether bleach can help mask THC metabolites in a drug test, Clorox bleach (a popular brand) manufacturer says that he is unsure where this myth originated.

The manufacturer also notes that bleach is not meant for ingestion, and this should never be tried.

In case the bleach is accidentally swallowed, you are advised to follow the first aid instructions on the product label and call the poison control center or a doctor immediately.

Well, some people had ingested bleach and survived to tell the story. YouTube is also full of clips of people pretending to swallow bleach.

But what do the doctors have to say about it? What can bleach do to your body when ingested?

According to the Clorox company, the active ingredient in its bleach is sodium hypochlorite.

This component is responsible for the bleaching, disinfecting, and stain removal functions.

Household bleach is highly basic, with a pH level of 13. In chemistry, bleach is an oxidizer.

This means that it strips electrons from other components.

On a human level, however, it causes chemical burns with whichever part of your body that it comes into contact with unless flushed with a lot of water fast.

According to the National Institutes of Health (NIH), bleach can burn the mouth and esophagus besides causing nausea and vomiting. NIH says that bleach aggravates serious medical conditions in high concentrations, including heart attacks and chronic respiratory issues.

Dr. Kamran Afzal, who works with the Mobile County Health Department, affirms that swallowing household bleach could cause serious burns in the mouth, esophagus, and stomach.

To answer the obvious question in your head, Stephanie Knutson, a drug analysis lab technician at Sanford Health in North Dakota, says that when ingested, bleach does not mask the metabolites that they look for when testing for drugs.

Overall, bleach is dangerous and can kill and should never be swallowed.

Can you pass a drug test with bleach on your finger? 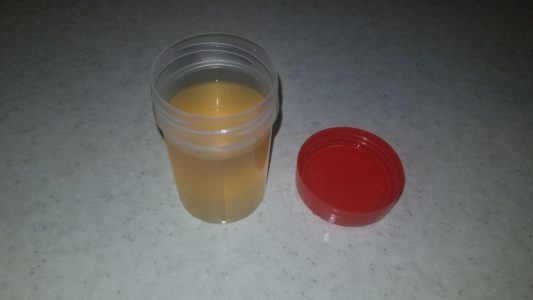 Mind you, long before the idea of swallowing bleach came up, people used to add it directly into the urine.

Considering the harmful effects that it might cause when ingested, most stoners who opt to go the bleach way find the idea of using bleach as an adulterant a little bit safer and perhaps more promising.

This regimen involves sneaking bleach (either in powder or liquid form) into the testing facility and adding it into the urine.

The good news with this method is that there is scientific evidence that shows that when added directly into the urine, bleach can break down THC metabolites in urine and help overcome an Immunoassay drug test.

There is scientific evidence that shows that when added directly into the urine, bleach can break down THC metabolites in urine

On the flip side, several challenges make this method simply unreliable and not worth thinking about.

First, bleach's toxic nature makes it a real challenge to sneak it into the testing facility.

While you could easily hide bleach powder under your fingernails or toenails, do know that it can easily damage the nail matrix or even cause serious burns on any part of your body that it comes into contact with.

This idea poses the second challenge: the strong fumes that this potent chemical emanates from after reacting with urine.

Almost anyone in the lab will be able to smell it.

This might raise suspicion and lead to thorough scrutiny of your urine sample.

The worst bit, however, is that urine reacts with bleach to form a red-brown discoloration that is easily visible with the naked eye.

After shaking, the urine showed a red-brown discoloration due to the resulting chemical reaction.

The bottom line is that there’s no way bleach will help you pass a urine analysis.

As we have just seen, it can be lethal when ingested.

Even worse, it won’t do anything to mask the drug metabolites in your urine.

Adding it into the urine sample isn’t an option either.

Bleach not only affects the pH level of the urine, but it also gives it a weird and suspicious discoloration that can be easily detected by the lab technicians even without testing.

This could make you fail the test due to adulteration.

If lucky, you could be subjected to another test now in a supervised environment.

If you must pass that drug test, the dilution method is always the safest, easiest, and cheapest way to do it.

This method involves taking a lot of water in the hours, leading to the urine test.

However, you must do it with caution to avoid being flagged for dilution.

What Does Bleach Do To A Urine Drug Test?

Potentially, it can change the PH value of the urine and stop drug detection.

What Happens If You Put A Few Drops Of Bleach In Pee For Drug Test?

What Happens When You Drink Clorox Bleach To Pass A Drug Test?

You can get very sick and, in some cases, even die.