When it comes to using niacin to pass drug test and flush out THC metabolites from the system, supportive evidence is scanty and questionable.

Nonetheless, we shall review the science behind the myths and possible arguments on the effectiveness of niacin in helping one ace a drug test.

Warning: Hundreds of mild to life-threatening cases are reported each year where drug abusers end up being hospitalized for niacin toxicity. 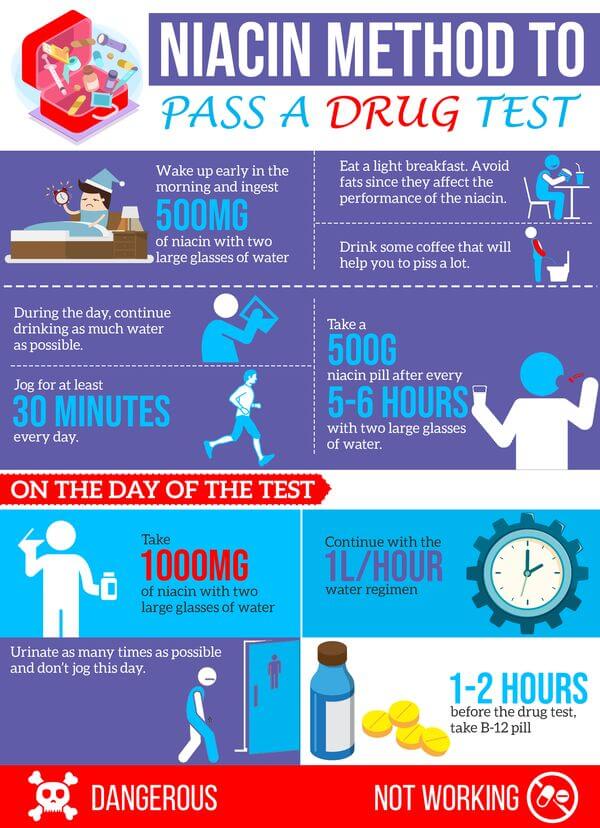 For those who propagate this theory, they recommend using this method the following way:

On the day of the test

What's Wrong With This Method

On careful scrutiny, this appears to be a dilution method. And like other dilution methods, you may need to take further precautions to avoid having your results canceled.

Dilution methods work by increasing urine volume and diluting the concentration of compounds in urine. But if you overdo this the whole composition of your urine including the color will change.

To further cheat the system, you will need to take vitamin B12 to give your urine a yellow color. You will also need to take some creatinine to increase the specific gravity of your urine.

Dilution methods have helped a few people pass drug tests, especially when extra precaution has been taken to mask the diluteness of the urine.

However, chances are high that this method may not work.

When preparing to pass an upcoming drug test, you may be desperate to try anything to ensure that you get a clean record.

However, you need to be cautious so as not to be misled by myths peddled on the web.

Niacin has been touted as an effective way to eliminate THC and its metabolites from the body.

Here are a number of myths that try to explain this theory:

Myth 1: Niacin is able to detoxify the liver.

THC is broken down in the liver into its metabolites which are then transported to the bloodstream, brain, and other organs.

Detoxification is the process by which toxins are removed from the body by being broken down and excreted through urine, saliva, sweat, perspiration, and stool.

If niacin helps in detoxification, then it can speed up the elimination of THC and its metabolites from the body.

Detoxifiers normally work by speeding up the release of toxins from the body and this usually happens in the liver.

Niacin is thought to promote detoxification in the liver. However, there is no scientific evidence to back this claim.

What is known is that niacin in high doses may cause liver toxicity and probably interfere with the breakdown of other drugs in the liver.

THC is lipophilic meaning that it binds to fat.

Niacin breaks down fat to release THC metabolites that have been stored in the fat.

This theory is based on this fact; niacin will speed up the breakdown of fats so that THC can be released from the fat cells and be excreted.

This means that niacin plays no role in breaking down fat cells that are holding THC metabolites.

This theory assumes that when blood vessels dilate they will be able to push out THC out of the body faster.

It also assumes that niacin will cause an increase in blood pressure that will speed up the removal of THC from the body.

Niacin causes increased blood pressure and vasodilatation in blood capillaries. When this happens, THC and its metabolites are released from the fat cells into the circulation from where they will be excreted through the kidneys.

One study revealed that niacin does not affect blood pressure in healthy patients.

Another study also revealed that niacin does not cause vasodilation in capillaries in fat cells as it does in skin capillaries.

THC is able to move freely between blood capillaries and fat cells to achieve equilibrium. When the blood is depleted of THC, THC will be released from the fat cells and vice versa applies.

There is no evidence to prove that niacin can interfere with this equilibrium.

This theory contradicts myth 1. THC is stored in fat cells.

This theory assumes that niacin can reduce the breakdown of fat cells hence there will be less THC in circulation.

There is no scientific evidence to back the claim that niacin inhibits lipolysis.

But should this happen, it may still not be able to influence the results of a drug test. By reducing the rate of lipolysis, there will be less THC in the bloodstream.

But remember that the equilibrium has to be maintained between the fat cells and the bloodstream.

THC and its metabolites move freely between the bloodstream and the fat cells and it will be hard to fool this system by reducing the amount of THC held in fat cells.

Apart from these theories being unsubstantiated, there are a lot of risks associated with consuming excessive amounts of niacin.

A study conducted by the children’s hospital of Philadelphia reported two life-threatening cases of niacin intoxication. Two patients suffered from the adverse reaction on the skin while another case reported neutrophilia.

Remember that an adult requires up to 18mg of nicotine on a daily basis. Doses exceeding 1000 mg per day may cause toxicity to the liver and other organs.

Another study by the University of Arizona reported metabolic acidosis and hypoglycemia in a teenager who had attempted to mask THC by using niacin tablets. The 16-year old ingested 13 grams of niacin in one sitting.

Soon after he experienced hypoglycemia, acidosis, transaminitis, and coagulopathy and had to be treated with bicarbonate infusion to reverse the symptoms.

While yet another 17-year-old patient attempted to use niacin to pass a drug test. The patient was able to recover fully, however, he stood the risk of facing acute liver damage.

Niacin may not be the ideal way to remove THC and its metabolites from your body so that you can pass a drug test.

However, there are other safer and more effective ways to eliminate THC from your system.

Avoid taking weed one month before the test

If you are a new or occasional user, THC may last in your system for up to seven days.

On the other end of the spectrum, the chronic user may have THC persist in their system for between one month to two months.

Just to be on the safe side, it is advisable to stop taking the drug one month to the test.

As discussed above, dilution methods target to dilute the concentration of THC in the urine.

As much as this may not work for everyone, it is a method worth trying. When you take plenty of fluids and are forced to pee regularly, you may test negative for drug tests.

This method involves taking lots of fluids to reduce the concentration of the urine.

But after achieving this you will need to take vitamin B12 to add color to the urine.

You might also consider taking creatinine to increase the specific gravity of the urine.

If this works you may be able to submit your urine sample without it looking too suspicious for a normal urine sample. Most drug tests will detect THC levels up to 50 ng/Ml.

Cranberry juice is known for its detoxifying abilities. It works as a diuretic meaning that it will make you pee a lot.

As mentioned earlier, peeing may help in reducing the concentration of THC metabolites in urine.

However, you will need to mask the effects of dilution in the urine.

Cranberry juice is also known to alter the pH of urine. This may alarm the lab people of possible interference with the samples.

Exercise is a natural way to stimulate lipolysis. As much as this may be encouraging to hear, exercise may not be the ultimate solution.

It will help in breaking down fat cells to release THC into the bloodstream; however, this method cannot be a quick fix for passing a drug test.

Niacin is a water-soluble vitamin that is available in a number of foods such as ground beef, pork, anchovies, turkey, salmon, peanuts, avocado, mushrooms, brown rice and wheat among others.

Most people do not require niacin supplements, especially when they are consuming a normal varied diet.

The following are the recommended daily dosages of niacin:

The body needs niacin to perform the following functions:

When you lack adequate amounts of niacin, you are likely to suffer from pellagra. Pellagra presents with symptoms such as dermatitis, diarrhea, and mental disturbance.

Other symptoms of niacin deficiency include fatigue, depression, memory loss, and skin problems. Most people are able to get the recommended dosages of niacin from their normal diet.

However, some people suffer from niacin deficiency and may need to supplement.

Should you suspect that you are suffering from niacin deficiency, do not be tempted to prescribe for yourself over the counter niacin pills. In excessive amounts, niacin can be harmful to the body.

Symptoms of niacin overdose include flushing, stomach irritation, liver toxicity, and blurred vision. These symptoms are worsened when you have underlying diseases such as diabetes, hypertension and heart disease.

In addition, niacin interacts with other drugs such as blood thinners, diabetes medication, and some herbal supplements.

This interaction will further complicate the adverse effects.

As it is, there are a couple of ways that you can use to “cheat” a drug test.

However, niacin is not among the tops methods. In case you choose to go ahead and use niacin, you should consider consulting with your physician so that they can rule out any underlying reason why this method may work against you in the long run.

Given the risk for toxicity and adverse effects, it is better to try other safer alternatives.

How To Use Niacin To Pass A Drug Test?

How Many Niacin Pills To Pass A Drug Test?

1000mg is a 2 niacin pills at the day of the test and up to 4 pills per day for several days before the test. We don't recommend it. Niacin doesn't work for passing a drug test and can cause liver damage.

Where To Buy Niacin For A Drug Test?

Niacin is over the counter drug, so you can buy it in any pharmacy store. Or online on websites like iherb and gnc.

How Long Before A Drug Test Should I Take Niacin?

You should take two 500mg pills of Niacin 3 hours before the test and then continue to drink 1l of water every hour.