Using activated charcoal to pass a drug test is in the limelight now.

But as it’s always the case, this method has been received with a lot of opposition mainly because of how it is said to work.

Going through several cannabis forums, one common claim that the opposition put forward is that THC metabolites aren’t in the intestinal tract.

As such, ingesting charcoal won’t affect the THC in your system besides making your poop black.

I’m not judging them, but such a misunderstanding would only come from parties that don’t understand the Enterohepatic Recirculation of THC and its properties.

So, let’s get to the basics of how this method works and scientific justification.

How Does Activated Charcoal Work

Activated charcoal is simply charcoal activated either physically or chemically to increase its surface area and enhance its absorption properties.

Thanks to its high degree of microporosity, a single gram of charcoal has been found to have a surface area of upwards of 3,000 m2.

Its high absorption rate makes it a go-to remedy for treating poisonings that have occurred by mouth.

When used as a medication, charcoal works by absorbing most toxins in the gastrointestinal tract before they are absorbed into the blood system.

And this is exactly where the bone of contention lies when charcoal is said to remove THC metabolites from the body.

In this method, it is ingested through the mouth, where it maneuvers its way through the GT before excretion through poop.

That being said, for this method to work, the THC metabolites should not only be in the stomach, but they should also bind on the charcoal.

According to most people’s belief, THC does not get into the gastrointestinal tract again once absorbed into the blood system.

Here’s one member’s response to an inquiry on whether charcoal is worth giving a shot on marijuana.com;

‘‘Activated charcoal is used (or was used) by emergency services to absorb poisons and overdoses in the Gastrointestinal tract.

Since the THC isn't in your stomach, intestines, or bowels, the only thing it will do is make you poop black (and probably vomit).’’

This is where most people get it all wrong. When THC has been entirely absorbed into the system, it enters a cycle where it moves from the blood system to the intestines and back to the blood system again through Enterohepatic Recirculation.

Let me make it more transparent for you.

Enterohepatic Recirculation and its Role in THC metabolites Disposition

Enterohepatic Recirculation refers to a cycle where biliary acids, bilirubin, and drug metabolites move from the liver to bile and into the intestines, followed by a re-absorption into the blood system again for transportation back into the liver.

And the cycle continues.

Compounds leave the enterohepatic cycle only if they are excreted through urine before the liver has cleared them. If they are passed out through feces before being reabsorbed into the blood system while in the intestines. 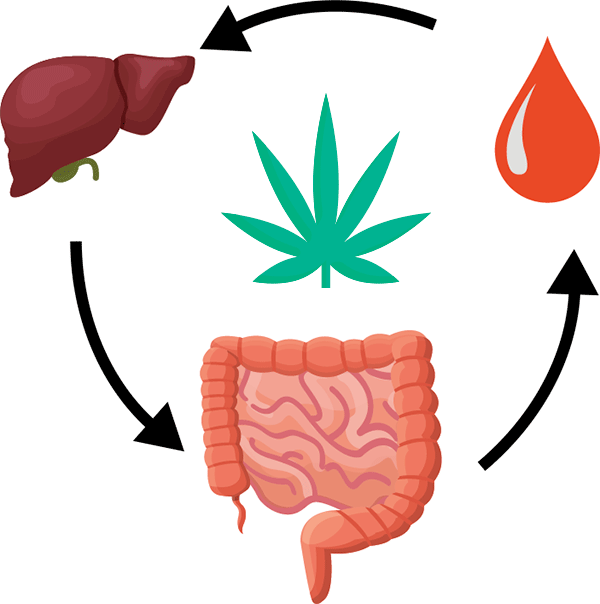 When you ingest cannabis, up to 95% of THC penetrates through the stomach and intestine walls into the bloodstream, where it is transported to the liver.

When you smoke or vaporize marijuana, THC is absorbed into the blood system through the lining of the mouth and tongue but mostly through the lungs.

Once it is in the blood, THC is transported to the liver, turned to 11-hydroxy-THC, and then THC-COOH.

However, as one portion of the THC-COO-Gluc is excreted through urine, another portion enters the bile.

A 2011 study found high THC-COO-Gluc concentrations in bile samples ranging from 139-21,275 ng/mL. This is proof that these cannabinoid conjugates do enter the enterohepatic recirculation.

So, how does the THC-COO-Gluc find its way into the intestines?

During digestion, the intestinal phase triggers bile juice release from the gallbladder to aid in the digestion of chyme in the duodenum.

As bile is secreted from the gallbladder, it comes with several waste products, including conjugated bilirubin and drug metabolites such as THC-COO-Gluc if you are a stoner.

The products in bile are either reabsorbed back into the blood system or eliminated in feces.

The THC-COO-Gluc metabolites are large and polar and cannot penetrate through the gastrointestinal walls.

Thus, perhaps the only option for them here is to be excreted through poop.

Well, that’s not the case. Some GT bacteria convert the THC-COO-Gluc into THC-COOH, making it easy for the metabolites to be reabsorbed into the blood system.

Next, they are taken back into the liver, and the entire cycle repeats itself again and again. 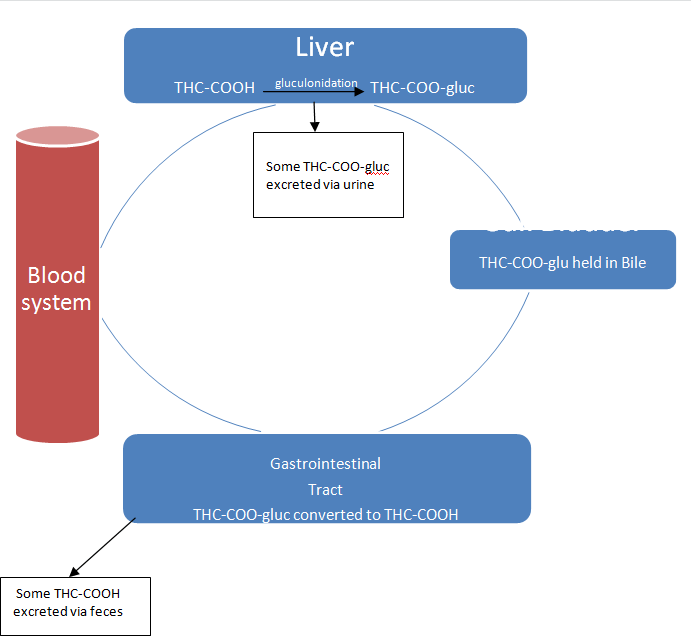 As the diagram above illustrates, the THC metabolites only leave the enterohepatic recirculation only when;

As the 2011 study (mentioned above) illustrates, many THC metabolites circulate between the liver and the gastrointestinal tract.

This means that if at all ingested activated charcoal can bind to the THC-COOH in the GT, then it might force out a good portion of the metabolites through the ‘back door.’

Consequently, this might reduce the number of metabolites circulating in the system, reducing the detoxification period.

So, in the next section of this article, we’ll be digging around to understand whether charcoal binds THC metabolites.

Are THC Metabolites Bound by Charcoal?

Several studies have been conducted to investigate how THC and its glucuronide interact with activated.

The most cited study is a 2013 research paper published in PubMed. In this study, the researchers found out that just 5 mg of activated charcoal binds over 1000 ng/ml of either free THC-COOH or glucuronide.

When the charcoal was replaced with wheat bran (a dietary fiber), it was found out that a higher amount of the fiber was required to bind the THC metabolites.

Precisely, the researchers noted that even 250g of wheat bran was not able to absorb 1000 ng of THC metabolites.

In yet another detailed study, researchers wanted to determine charcoal efficiency in absorbing THC metabolites in the enterohepatic recirculation.

In this study, 8 healthy volunteers took a dose of THC-COOH metabolites on 2 occasions.

The subjects were randomly picked for treatment with a dose of either activated charcoal or a placebo during the first occasion.

They were then crossed over and treated to the other dose during the second observation.

The charcoal was administered in 5 g doses and at 6-time points totaling 30 g. The volunteers ingested 5g 15 minutes before taking the THC and another 5g dose 5 min, 2, 4, 7, and 10 hours after ingesting THC-COOH.

The researchers found out that;

The above 2 studies are clear indications that activated charcoal absorbs a considerable portion of THC metabolites with it as it heads out of your body via feces.

That being said, it might be a great addition to a detoxification regimen.

How to Use Activated Charcoal to Pass Drug Test

Is it safe to take charcoal pills every day? If so, will it shorten the detoxification time?

There are lots of people who take charcoal pills daily without any issue.

However, given the high risk of constipation, it’s important to take it at a slightly lower dose.

Also, remember to go by the manufacturer’s recommendation.

Most manufacturers recommend taking 2-4 pills depending on the amount of activated charcoal in each pill.

Can activated charcoal be used as a same-day solution?

This method is highly recommended if you have at least a week or two to the drug test.

However, it won’t harm if you incorporated it into a same-day solution such as the dilution method.

As I have explained in my other article on how to pass a drug test using water, the dilution method does not speed up removing the metabolites in your body.

But it waters down the metabolites' concentration in the urine to below the detection level if it is done correctly.

That being said, I imagine ingesting activated charcoal a few hours to the drug test could help in capturing the metabolites landing in the intestines from the blood system and removing them before reabsorption.

This might help minimize the available metabolites that are passed out of the liver for excretion through urine.

Consequently, this increases your odds of beating the drug test using the dilution method.

How long does it take to detox?

Unfortunately, no relevant study has been carried out around this. But I tend to think that it will vary from one person to the other.

Worth mentioning is that the charcoal pills method only interacts with the THC metabolites in the enterohepatic cycle.

They have no access to the THC stored in your fat cells.

The pool of fat-stored tetrahydrocannabinol varies between people depending on a few factors such as different body fat percentages, different metabolism rates, and how long someone has been toking.

THC is highly fat-soluble. This means that people with a higher fat percentage tend to store more THC in their bodies for a long.

Your metabolism rate also dictates the number of metabolites released from the lipids into the bloodstream for removal through urine and poop.

Therefore, detoxification might take a shorter time than the case with an individual with a lower metabolism rate.

That being said, if you have, let’s say, two weeks to the drug test, adding exercises to the activated charcoal regimen might boost the speed of detoxification.