Depending on many factors (to be discussed later), it can take about 3 days to completely rid an athlete’s system of weed, If you’re a first-time smoker.

For frequent users, the detection window is about 5 to 7 days. Those who smoke not less than a joint daily will test positive for at least 30 days.

But, here's the thing: we know that THC, the active substance in weed that drug tests are looking for, is stored in body fat. Since athletes have lower body fat – and high metabolic rates, meaning fat is burned quicker and THC is released and excreted quicker – THC tends to stay in their system for a shorter period. 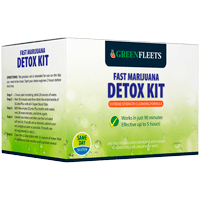 In short, THC will be removed from an athlete's system quicker, and hence their chances of passing a drug test, even though they're using weed, are better as compared to ordinary people.

Today, I'll explain to you how long does weed stays in the system of an athlete, what factors affect this time, and how you can calculate how long an athlete’s system will take to remove weed from their body completely.

How Long Does Weed Stay in Urine, Blood, Saliva, and Hair

Weed can be detected in urine after last use as follows:

Weed remains detectable in blood for about 1 to 2 days. But in certain cases, it has also been detected after 25 days.

As is obvious, chronic heavy use will increase the period of detection.

If the drug test involves saliva, weed will be detectable after last use as follows:

According to simple math, a 1.5-inch hair segment sample taken close to the scalp will provide an estimate of weed use for the last 3 months.

Why Is THC Detectable So Long After Use

As I’ve mentioned before, weed's active ingredient is the chemical THC, or delta-9-tetrahydrocannabinol (delta-9-THC-COOH).

Let me briefly run you through what happens when you consume marijuana or any product that contains THC, and you’ll understand why THC lingers in the body for so long.

Basically, when you smoke weed, it travels through your lungs, enters your bloodstream, and finally makes its way to your brain, getting you high.

When it reaches the liver, a glucuronide molecule is attached to it, making it THC-COOH-glucuronide. This compound is excreted through stool and urine, whereas the remainder gets reabsorbed into the bloodstream.

To answer your question: because THC is extremely fat-soluble, some remain ‘trapped’ in body fat tissues. The remainder is metabolized by the liver and excreted slowly via urine and stool, making it detectable in your system for weeks and months.

What Factors May Impact THC Metabolism

What I’ve mentioned earlier in terms of the time it takes to rid your body of weed are just generalizations.

Many things influence the metabolism and removal of weed from the body.

Here I’ll be discussing these factors.

To finally answer this question, let me introduce you to the THC calculator – a statistical tool that can help you quite accurately determine how long THC will be completely removed from your system.

But bear in mind: the results of a weed calculator are not 100% accurate; since we’ve already discussed that many factors are involved.

For athletes, remember that they:

All these factors mean that the time for weed to clear their system will be lesser than normal users.

Anyway, after you’ve selected the metric units you want your answer in (inches, centimeters, pounds, kilograms), the basic information you need to get the most accurate clearance time is:

After crunching some numbers, the calculator will give you an accurate estimation of the time it will take for weed to clear your system!

If you’re a math geek and want to crunch number yourself, say hello to the concept of ‘half-life’ - the time it takes for half of the THC in the body to be excreted.

According to a study, the excretion half-life during the first five days following weed intake was approximately 1.3 days (27 hours) for infrequent users.

And, for heavy users, half-lives would be longer.

For our calculations, let’s assume that a first-time, slim athlete with a fast metabolism smoked 1g of marijuana with 20% THC content. This resulted in 200mg of THC in his body.

According to another study that will help our calculations, if there is 27mg of THC in a joint, the amount of THC-COOH in a smoker’s urine would peak at 180 ng/mL after 4 hours.

Using simple cross-multiplication laws, after smoking 200mg of weed, the concentration of THC-COOH in the urine of an athlete would be 1330ng/ml.

After 26 hours, the concentration would be 665ng/ml.

And fast forward to 130 hours – the concentration would become 40ng/ml, which is below the detectable level of a urine immunoassay drug test. This would take about 5 days and 10 hours.

For a gas chromatography urine drug test, which is more sensitive, the cutoff value is 20ng/ml. So that means 2 more days for THC to become undetectable from the urine of an athlete.

Conclusion: it would take about 8 days to significantly lower the concentration of THC-COOH in the urine of an athlete to below the detectable level of urine drug tests.